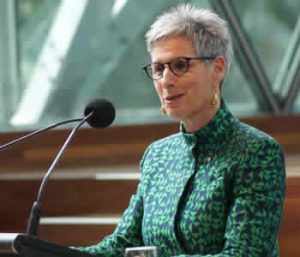 One of the key objectives of Victoria State Chair, Paul Wheelton AM was to have a ‘signature event’ created for the Victoria State Branch. From this the Inspiring Australians Oration was established.

The Inaugural Oration was held on Friday 24 February 2017 at the Deakin Edge, Federation Square in Melbourne with Her Excellency Linda Dessau AC Governor of Victoria invited to present the Oration.

Her Excellency spoke of the many people in her life that had inspired her, whether at school, University, the sporting arena, the Military or within the community.

The Governor concluded with the following: …. “I hope this wonderful initiative of the Victorian Branch of the Order of Australia Association is repeated next year and each year thereafter. I have had to discipline myself to stop here because there is no end to the inspiring Australians to whom I would dearly like to refer……..

And I say this is a wonderful initiative because it gives us all the opportunity to be inspired. We are all the better for the inspiring deeds of others. We are all enriched. A high tide truly does lift all the boats.”

A copy of the Inaugural Oration can be found through the following: 2017 Oration

In February 2018, the Victoria Branch of the Order of Australia Association was privileged to have Dr Susan Alberti AC deliver an inspirational Oration to an audience of more than 200 people; Association members, friends and senior students from some of Melbourne’s finest schools.

Dr Alberti’s successes in life have been outstanding, achieving many of the personal crusades she has embarked upon.  These, despite and inspired by the many personal tragedies she has faced and overcome.

Courage, determination, resilience and optimism were keynotes of her Oration.  She spoke of the difficulty of losing her husband at an early age and the subsequent need for her to study and become the first woman registered builder in Victoria.  The need for her to then manage four construction businesses and raise a young daughter on her own.  Dr Alberti spoke of the tragedy of her daughter losing her battle to Type 1 diabetes, followed by her determination to successfully overcome her own battle with lymphoma.

Dr Alberti chose to turn these battles into something positive and she established a Foundation raising funds much needed for research into a cure for Type 1 Diabetes. Her boundless energy was also channelled into the successful establishment of the Woman’s Football League (AFLW)

Named the 2107 Melbournian of The Year, Dr Alberti is also The Chairman of the Australia Day Ambassador Program, and remains a passionate supporter of the Western Bulldogs, a generous philanthropist and a very proud Melbournian. 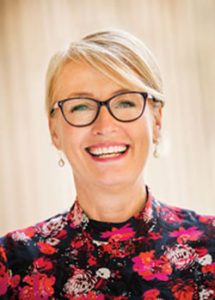 The 2019 Inspiring Australians Oration will be delivered by Sally Capp, Lord Mayor of the City of Melbourne.

The Oration was held on 27th February 2019 at Deakin Edge, Federation Square.

Sally commenced her address by congratulating all those with honours, saying that she was inspired very much by honourees and thanked them for their contribution to our community. Her genuine admiration for honourees was evident throughout her presentation.

The Lord Mayor spoke a little about her role and then mentioned a quote from Winston Churchill Success is going from failure to failure without a loss of enthusiasm, saying that’s the same for all she admires.  Some of her examples of inspiration included people such as JK Rowling who received 12 knock backs when she submitted her writings to publishers – but she never gave up!

Sally spoke about inspiring Australians such as Sir John Monash who struggled at school and became a military hero, stating that Victoria owes a great deal to this inspiring Australian. William Angliss – an immigrant, butcher who embraced new ideas to become successful. The Hon Susan Ryan AO, an Australian public servant/former politician and the Age Discrimination Commissioner, whose work for equal opportunity was very important to Australia. Rob Adams who was a town planner and worked hard in development of the City of Melbourne.

Her personal role models were her uncle David Morgan and Ros Kelly a former Federal Minister. She also mentioned leaders in the community doing extraordinary things and in particular congratulated honour recipients who make our world richer.

She concluded her remarks by quoting Edward Hale: I am only one, but I am one. I cannot do everything, but I can do something.

The 2020 Inspiring Australians Oration is being at the Melbourne Town Hall commencing at 11:00am followed by light refreshments at 12 Noon.

The Oration is to be given by Kevin Sheedy AO. There is more to Kevin than football; he is a marketer, thinker, innovator, the holder of awards for community service and an inspirational speaker, capable of talking about subjects way beyond the boundaries of sport.

Register for this event via the TryBooking site at: https://www.trybooking.com/572708