Our Patron – Her Excellency Professor the Honourable Kate Warner AC

Her Excellency was sworn to Office at Government House on Wednesday 10 December 2014 as Tasmania’s 28th Governor. 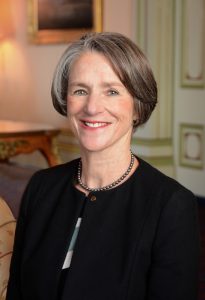 On 26 January 2014 Her Excellency was appointed a Member of the Order of Australia (AM) for her significant service to the law, particularly in the areas of law reform and education. On 26 January 2017 she was appointed a Companion of the Order of Australia (AC) for her eminent service to the people of Tasmania through leading contributions to the legal community, to law reform, to higher education as an academic, researcher and publisher and as a supporter of the arts and environmental and social justice initiatives.

She was a Commissioner of the Tasmanian Gaming Commission, with a particular interest in regulation, gaming policy and harm minimisation.

Professor Warner had been a Member of the Sentencing Advisory Council since 2010, and assisted with the preparation of the Council’s discussion papers and reports.

As the former President of the Alcorso Foundation, Her Excellency supported social and cultural advancement in the community through its programs in the Arts, Environment and Social Justice.

She has received a number of awards and fellowships, including Foundation Fellow of the Australian Academy of Law in 2007; Visiting Fellow All Souls College Oxford in 2009; the University of Tasmania Distinguished Service Medal in 2013; and the Women Lawyers Award for Leadership in 2013. She has been nominated as a finalist in the Tasmanian Australian of the Year Awards for her contributions to the law, law reform and legal education. In December 2016 she was made a Fellow of the Australian and New Zealand Society of Criminology.

Her Excellency graduated with a Bachelor of Laws (Honours) from the University of Tasmania in 1970, and a Master of Laws in 1978. She served as associate to the former Chief Justice, Sir Stanley Burbury, in the early 1970s.

She has published numerous journal articles, book chapters and law reform reports. She first published Sentencing in Tasmania in 1991, which has since become an indispensable tool for judges and magistrates. She is a member of the editorial boards of Current Issues in Criminal Justice; Women Against Violence; and the Criminal Law Journal. She contributed the annual Sentencing Review to the Criminal Law Journal from 1998 until 2014. Related to her role with the Tasmania Law Reform Institute, she has written a number of papers and reports for the Board.

She is grandmother to five grandchildren, a passionate gardener, keen bushwalker and occasional cyclist.

Her Excellency is married to Mr Richard Warner, and they have two daughters. Richard was the recipient of a Churchill Fellowship in 1999, and was actively involved in the Derwent Valley community. He is a keen horticulturalist, and interested in the re-use of redundant heritage buildings in Tasmania. On 26 January 2020 Mr Warner was appointed as a Member of the Order of Australia for significant service to agricultural research and development.