Recognition for Outstanding Service to the Community

The Order of Australia recognises those who have made outstanding contributions that benefit their communities, and ultimately our country. These awards, by their very nature, define and identify role models at all levels within our communities and inspire us all to become more fully engaged citizens. The Order of Australia Association (NSW) Youth Community Service Award was instituted to recognise similarly outstanding service to the community by senior NSW secondary school students. Each year, all NSW High School Principals are requested to consider recognizing outstanding community service by a senior student during years 11 or 12 of the NSW HSC or International Baccalaureate programs. Traditionally, academic and sporting achievements, as well as service to the school community, are recognised and rewarded within individual school systems. 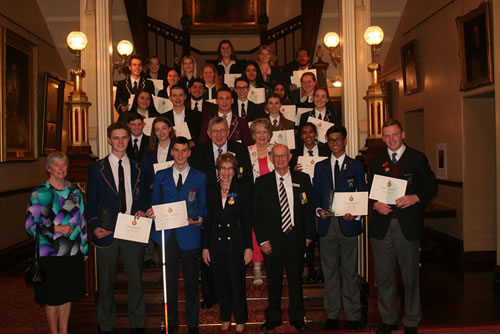 There are, however, many students who extend that service beyond their school boundaries and into their communities – local, national and even international. This service beyond school boundaries was recognized by the late Dr. John Lincoln AM, a member of the NSW Branch of the Order of Australia Association. He initiated the Youth Community Service Award for the NSW Branch in 1992 and it was first presented to 20 students in 1993 for their exemplary community service. His name was added to the Award title in 1993 on his passing. Since then, it has been continued by the NSW Branch and expanded to 25 Awards in 2012. This year, 2019, the Branch Committee has reverted to the original name of Youth Community Service Award, an Award of the NSW Branch of the Order of Australia Association. This has been done to more clearly identify it as a NSW Branch Award and to bring its nomenclature more into line with those of the other States.

Community service is wide ranging, with examples from the 2017 – 2019 nominations including:

introduction of tactile banknotes for the visually impaired, establishment of Women’s Shelters, service with emergency services organisations, acceptance and advocacy for inclusion of immigrants and refugees, recognition and support of multicultural initiatives, service learning for development, environmental awareness and climate change, representation at National and International workshops and conferences

Over 1,000 NSW High School Principals are contacted by email in April each year with information and a request for nominations. Nominations normally close in late May and all are individually assessed by a judging panel of 3 members, each an Order of Australia recipient. The 25 successful nominees are finalised at a subsequent plenary meeting of the panel. Awards are presented by the Governor of NSW, Her Excellency the Honorable Justice Margaret Beazley AO QC at a special ceremony held at NSW Government House in September.

The recipients of these awards are very special young Australians, whose actions and contributions have set them apart and enriched their communities, often well beyond the boundaries of their schools.

Further information on the Award and the nomination process can be obtained from the Award Convenor, Dr Frank Kelleher OAM on 0427 644 397 or fkellehe@bigpond.net.au